We started this week with a new series of symphonic orchestra recordings.

The complete symphonies of Robert Schumann with The Netherlands Radio Chamber Philharmonic Orchestra lead by Michael Schønwandt.
During these sessions we recorded the 1st and 4th symphony. In June no. 2 & 3 will follow...

A great honor and a fantastic project which will be released by Challenge Classics. 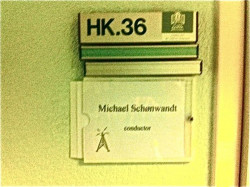