From Heaven on Earth - Lute Music from Kremsmunster Abbey 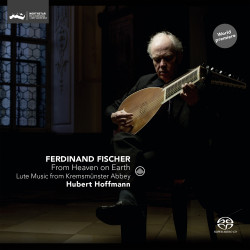 About the Album
Hubert Hoffmann: When I visited the Benedictine Abbey of Kremsmünster in Upper Austria some years ago to look at the lutes stored in the abbey archives, I could not guess that this visit would radically change my life as a lutenist. I learnt that the writer of tablatures I discovered was a member of the abbey named Pater Ferdinando (Fischer). It soon turned out that much of the music set down by this scribe was not to be found in the numberless lute manuscripts from this period scattered around the world. These were unique manuscripts. Moreover they contained quite extraordinary works of striking compositional quality: new lute music in the form of cyclical poems of a lute enthusiast – a padre – at the turn of the 17th/18th centuries.
In one of the quietest recording studios in all of Europe – the Galaxy studios in Mol, Belgium – we finally brought the long since faded lute-poems of Pater Ferdinando back to life. Through the wonderfully delicate sound of my lute, Bert’s immeasurable sensitivity and the most advanced recording technology that I have ever had the privilege of using, the lutenist-pater began speaking to us once more.

Contextually Fischer’s putative original compositions are only distinguishable from the other anonymous works through their stylistic features. The first clue is to be found in the considerable proportion of previously completely unknown cycles, whose exquisite quality, high degree of originality and compositional autonomy, together with the considerable technical demands they make upon the player, lead us to assume a common authorship.