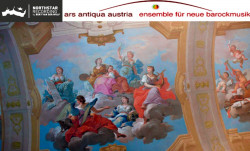 This week we are in St. Florian near Linz and Salzburg for recordings with Ars Antiqua Austria. Music of he 18th century composer Christoph Graupner.
For the first time we record such a "baroque ensemble" in the kind of "room" which most likely is similar to rooms where this music could have been performed regurarely in the 18th century. Often recordings of older music, played with historic "period" instruments, are in concert halls of much later date and in churches with a rather religious acoustic and atmosphere. Worldly chamber music however was mostly played in palaces and this recording location might be much more "authentic" in that sense.  This room communicates the "Baroque philosophy" with an overwhelming visual and auditive illusion. Being a very small room, one however has the feeling to be in a much larger place due to the painted ceilings and walls with deep perspective and the sound is so much "larger than live" that one could speak of a "reverb unit avant la lettre"...A new experience to say the least, and a completely different recording technique is required to capture this surrounding in a convincing way. The picture shows the overwhelming paintings and ornamentations in the room which give it it's distinct acoustic and baroque atmosphere...