A special moment for Northstar!

Due to an advertisement campaign of The Netherlands Symphony Orchestra Northstar has ended up on the side of a train...!

Since Challenge chose to put Norhstar's HQ logo "by Bert van der Wolf" on the cover of the productions, this than suddenly was part of this design on the train. A special feeling to experience, nothing important or life altering  in essence, but it does fill me with pride! One could call this a once in a lifetime situation. How many time will your name appear on a train?
Although many musicians we work with are on the billboards in the cities all over the world all the time, we as more transparent part of musical productions mostly operate relatively invisible. For a few months this is now not the case!

A special moment for Northstar! 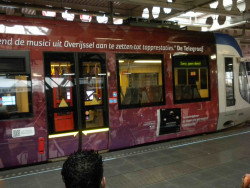